English Fellowship Church & Kadavan’s* Story
Once during my first week in Ecuador I was skyping with Jason.  He had been in Afghanistan for about a month and was starting to feel the effects of lacking fellowship/community with other believers.  It can get very lonely sometimes when you’re the only Christian in your workplace or your household, or both.
It got me thinking about my time in Ecuador.  I had only been there a week and was still feeling the euphoria of being in a new place and experiencing new adventures.  But like Jason, I knew it would only be a few weeks before I would start to miss the encouragement and growth and community that comes from meeting regularly with a body of Christ-followers.  So I started to pray for God to provide fellowship during my time in Ecuador.  I really didn’t know what that looked like, especially since I was living in a country where hardly anybody spoke English, but I knew that God would make a way to meet that need.
The following week, I arrived early to my Spanish lesson in Quito.  Sitting in the lounge was a kid listening to music in a language I didn’t recognize.  I introduced myself in Spanish, but he responded in fluent English.  Grateful for easy conversation, I asked what brought him to Ecuador, and he shared with me his incredible story.
Kaduvan was born and raised in northern Sri Lanka. For those of you who aren’t up to speed with Sri Lankan history, (I sure wasn’t): the country has been under civil war for ages. The Tamil, a minority group that occupies much of the northern country, and the Sri Lankan government have had differences in language, religion and political viewpoints for many years. After a series of events and changes in political leaders, the country broke out into civil war. Being the minority, the Tamil fought with unconventional methods that quickly earned them world-wide recognition as the fiercest terrorist organization in the world: the Tamil Tigers. To this day, they are the leaders in numbers of suicide bomb attacks. The government also fought back in horrific ways. Children accused of having Tiger fathers have been shot and killed. Tamil women are often brutally raped before being killed, and many of the dead bodies are stripped naked and laid in the streets as an example. Many Tigers claim that the Monastery bombing that claimed many innocent lives was staged by the government in attempt to gain global support.

Many families fled Sri Lanka during this holocaust. Neighboring countries put a cap on how many they could take.

Militaristically and politically, the war is “over,” but Northern Sri Lanka can still be a dangerous place to live if you’re Tamil, an ex-Tiger, and a Christian especially.

Kaduvan is all of those things.

When he was young, Kaduvan’s father left him and his family. He was a Tiger. He later died from a heart attack. His mother tried to kill herself by drinking poison, but ended up in a hospital where someone shared the Gospel with her. She gave her life to Christ and consequently taught her children about Jesus. Kaduvan always believed, but got involved as a Tiger like many other youths. He was taught to hate the government, hate Muslims, and to defend the Tamil at all costs. It wasn’t until he grew and matured in his faith that he realized this was wrong and withdrew his involvement as a Tiger, spending more time volunteering with the youth group in his church.

When the war made it very dangerous for Tamil to live in Sri Lanka, Kaduvan’s family fled the country. His mother was granted a visa in the Netherlands along with one of his older brothers. His sister lives in Swizterland with her husband. Another sister made it into England. But Kaduvan, with his Tiger history, can’t get a visa anywhere. With the financial help of his family, he has literally moved from country to country, staying until his tourist visa expires, then moving on to the next country. He has lived in Italy, Cyprus, Switzerland, Jerusalem… staying in hostels or with family or with churches. He hasn’t seen his sister in thirteen years, his mother in five. Once, at airport customs in the Caribbean, he was accused of being a terrorist trying to get into the U.S. illegally via Mexico. He explained that he had no desire to get into the U.S., that he wasn’t even Muslim, but they argued that he looked like a terrorist. For hours he argued with them until they finally sent him away at his own very costly expense.

Another time, in Cyprus, Kaduvan got caught staying past his visa. He was put in jail with his only other option to return to Sri Lanka. This was a dangerous alternative because once arriving in Sri Lankan airport, the officer need only recognize his passport name as Tamil, and he could get arrested or killed. He stayed in Cyprus jail for 59 days, sharing the Gospel with the visiting Chaplin, before deciding to leave. He begged God for a miracle, to protect him as he returned to Sri Lanka. At the airport, he said that his hand was shaking like mad as he handed over his passport at customs. He said that the officer read it, looked up at him for a long time, then let him through. Praise God! He was able to live and work quietly for eight months in Sri Lanka before learning that Ecuador didn’t require a visa for the first three months of living there. He made it to Ecuador, has been living with a host mother, and took a month’s worth of Spanish lessons at the same Spanish school I was.

And he invited me to church with him. 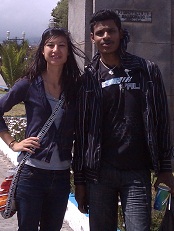 Being in a foreign country far from family, Kaduvan was in need of a friend, too. It is so awesome to see the way God answers prayers.

So the messages of the church Kaduvan found are in English. Nearly the entire congregation is made up of missionaries from all over the world, but mostly North America. They have the sermons written up ahead of time in both English and Spanish, for any non-English speakers that want to follow along.

There are two services, each with about 100 persons. Kaduvan introduced me to the youth pastor (from Colorado) and his wife (who grew up all over South America with her missionary parents). It is so funny to meet a blond-haired, blue-eyed Ecuadorian who speaks both perfect English and perfect Spanish… but that’s what half the church is comprised of! I was so encouraged to meet family after family, young couples, couples with young children, families with older children, kids my age who go to college in the States, but are home in Ecuador for the holidays… all who had been called to Ecuador to share the Gospel. Their stories are amazing and their ministries so neat, ranging from doctors to teachers to pastors to radio broadcasters to pilots to free-meal and youth workers… All coming together every Sunday to worship God together. What an amazing place!

My first service was a couple weeks before Christmas, so we sang Christmas songs with a couple verses in Spanish.  (How awesome!)  The pastor, from Canada, is just awesome and speaks insightful truth in such a genuine and relatable way.  He told us about girl who had stayed in her seat after the first service just weeping.  When asked why she was crying, she explained that she was a student from South India studying here in Quito for six months, doing an internship.  She spoke little Spanish and had been looking for a church for the past couple months.  It was her first Sunday at EFC, and she was overwhelmed with joy and thankfulness that she had found an incredible place to worship God in with so many other believers.  Wow.  If only I walked into church every Sunday like that.  We totally take our abundant access to the Gospel for granted!
After the service, a of couple women around my age introduced themselves and invited us to lunch with them and their friends.  About six of us met up for burritos and swapped stories and experiences.  One was a 19 year-old girl from London who is here in Quito for nine months with the ministry Pan de Vida (Bread of Life).  I was blown away by her youth and her passionate heart to serve God and serve others, and I found it hilarious when she used words like “sick” to describe what God was doing in Ecuador.  I feel like most other 19 year-olds are more concerned about where their next party is than for the kid who shows up every week to eat a real meal.  Her name is Hailey, and you can pray for her, because I think she’s “sick.” :)
Another woman was actually from Ecuador, but had studied for four years in Southern California, so her English was great.  She has a heart to reach Muslims in unreached parts of the world and feels called to India, but met her soon-to-be husband just before leaving for missionary school.  She’s wondering how the two are going to work, but I encouraged her to trust God with both.  I shared how God had called me to marry Jason although it had appeared to conflict with my desire to be a medical missionary… but with faith and open hands, God worked it out better than I could have ever imagined!
I spent Christmas Eve with my Ecuadorian family, but a family from English Fellowship Church also invited Kaduvan & I for a traditional U.S. dinner on Christmas Day.  What a blessing to spend Christmas with an English-speaking family in their cozy Ecuadorian home and eat turkey and cranberry sauce!

Also through English Fellowship Church I met a couple doctors who let me shadow them in the missionary hospital nearby, which is associated with the radio ministry HCJB Radio.  (For those of you that are familiar with the incredible story of Jim Elliot, Rachel Saint, and the other missionaries that gave their lives to reach the Waorani Indians of Ecuador, MAF (Mission Aviation Fellowship) is also associated and located nearby).

Thank you EFC for the fellowship, encouragement, love, and community during my time in Quito.  God is doing amazing things in and through you guys, both in Ecuador and around the world!

*My dear friend actually goes by a different name, but I changed it here for security reasons.

One response to “EFC & Kadavan’s Story”