Yesterday after work I met the husband at –(get ready for this:)– an MMA gym.  If you don’t know what MMA is, it stands for Mixed Martial Arts.  Think cage fighting.

Now, I used to be a huge un-fan of MMA fighting.  When Jason would watch a fight on UFC, I used to make a loud noise of disgust and make a point to leave the room.  (Classy, right?  Remember women, you can be right, but have the wrong tone!)  But over time, with Jason explaining some of the techniques and skills, I gradually started to understand MMA as a skill and sport instead of two guys pummeling each other in a cage for entertainment.

I still cringe when I see elbows to the face or spilled blood, but my horizons have been expanded enough to check out an MMA gym a few towns over!

It was called Energy Sport Complex in Volo, Illinois.  The gym consists of a mid-sized warehouse filled with a large mat, a lot of cross-fit equipment, and of course, a cage. 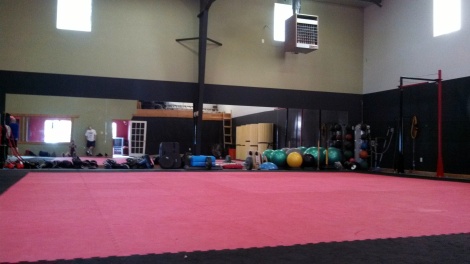 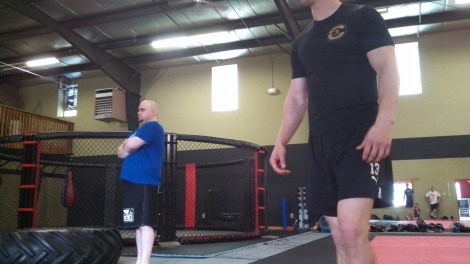 We tried their 6pm Boot Camp class.  The first difference I noticed right away from traditional gyms is that we took our shoes off.  I’ve never worked out barefoot before, and it actually took me awhile to get used to running and jumping around sans shoes!

We started out with a classic warm-up that included five solid minutes of jump rope.  (My calves were burning by minute 2)!  We rounded up the war-up with a segment of “animal crawls” across the mat, (i.e. bear crawls, crab walk, duck walk…) that had us using different muscle groups against our body weight.  It was a solid, well-rounded warm up that got my heart rate up and my muscles warm!

The main segment of the class was a mix of cross fit and boxing.  We did a circuit that closely resembled the workout we did at a crossfit gym we visited last month, using medicine balls.  But what really made this gym stand out for me was the boxing part! 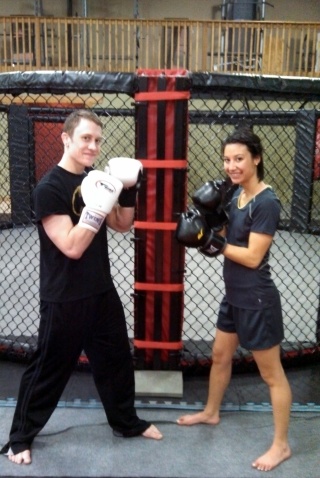 Michael, one of Energy’s trainers, partnered with me for this part of the workout.  (Rookie alert!)  He did a fabulous job explaining techniques of each strike and correcting my form.  (I had no idea how technical a punch was!)  He was able to work with me while still leading the class.  He also had me moving and bouncing around the mat, keeping me on my toes the whole time! (Literally!)

The striking part of the class was definitely a workout!  I loved that it got me sweating and breathing heavy without even realizing it.  (I was so focused on my striking technique!)

It was a fabulous workout, and I would definitely recommend Energy Sports Complex to anyone in the northern Chicago area.  Whether you’ve practiced MMA before or never thrown a punch, you’ll enjoy this workout!

Well, it’s off to work for me! I’ll try popping in later to cover FOOD and FAITH.